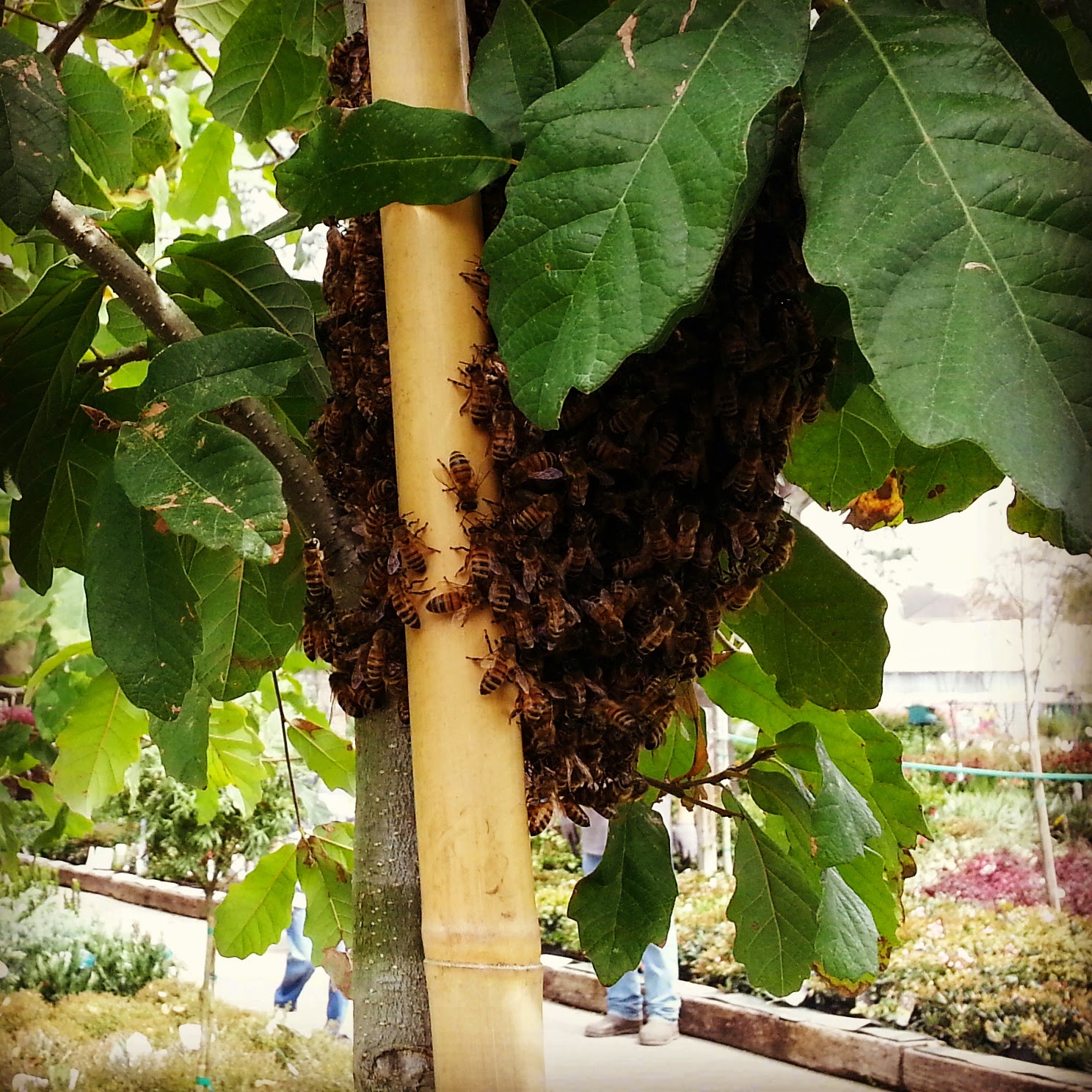 Yesterday, the first honey bee swarm of the year in Texas was reported in Port Lavaca.  This is early for spring swarms, but is not surprising, considering how warm our winter has been.  Swarming is the natural act of propagation for a colony of bees in the spring.  When a colony realizes it has enough bees and supplies to survive in Spring, the workers collectively begin swarm preparations.  Queen cells are built to develop the next queen for the hive and half the workers leave for a new home with the old queen and half the supply of honey.

Beekeepers have developed strategies to prevent swarms because a hive that swarms will not produce a crop of honey that year.  We inspect and manipulate our hives weekly during the swarm season to prevent swarms.  If we do see swarm preparations, we accept the division of the hive and manually create new hives rather than letting the bees fly away on their own.

If a hive issues a swarm…

Typically, they will find an object (tree limb, fence post, picnic table, etc.) to cluster for a short period while scouts look for a new cavity to call home.  They are not aggressive or defensive at this stage, because they don’t have a hive or any developing bees to protect.  Hopefully, they don’t find a cavity in a house, like in the picture above, because then they are very difficult to remove.  If a beekeeper can find a swarm while still in this clustered, looking-for-a-new-home phase, they can be shaken or brushed into a box and taken to a bee yard.

Honey bee swarms follow scents to look for a new home.  They can smell an area that has been used for a hive in past seasons.  We use this to our advantage by placing old hive boxes with old comb in areas where swarms have been seen in the past.  By luring a swarm into one of these boxes, we can stop them from building a home in someone’s house and create a new production hive with good overwintering genetics.  Once the swarm occupies the trap, we can take it to one of our bee yards and let them grow to a proper hive.

If you have seen honey bee swarms in your neighborhood and would like us to deploy a swarm trap in your yard, let us know in the comments below.

Our first swarm in the Houston area

On March 17th, we captured our first swarm in the Houston area.  The picture above shows the softball-sized swarm resting on a potted oak tree.  We boxed the swarm and verified a mature queen ready to create a new hive.  We look forward to see how well this colony grows this year.