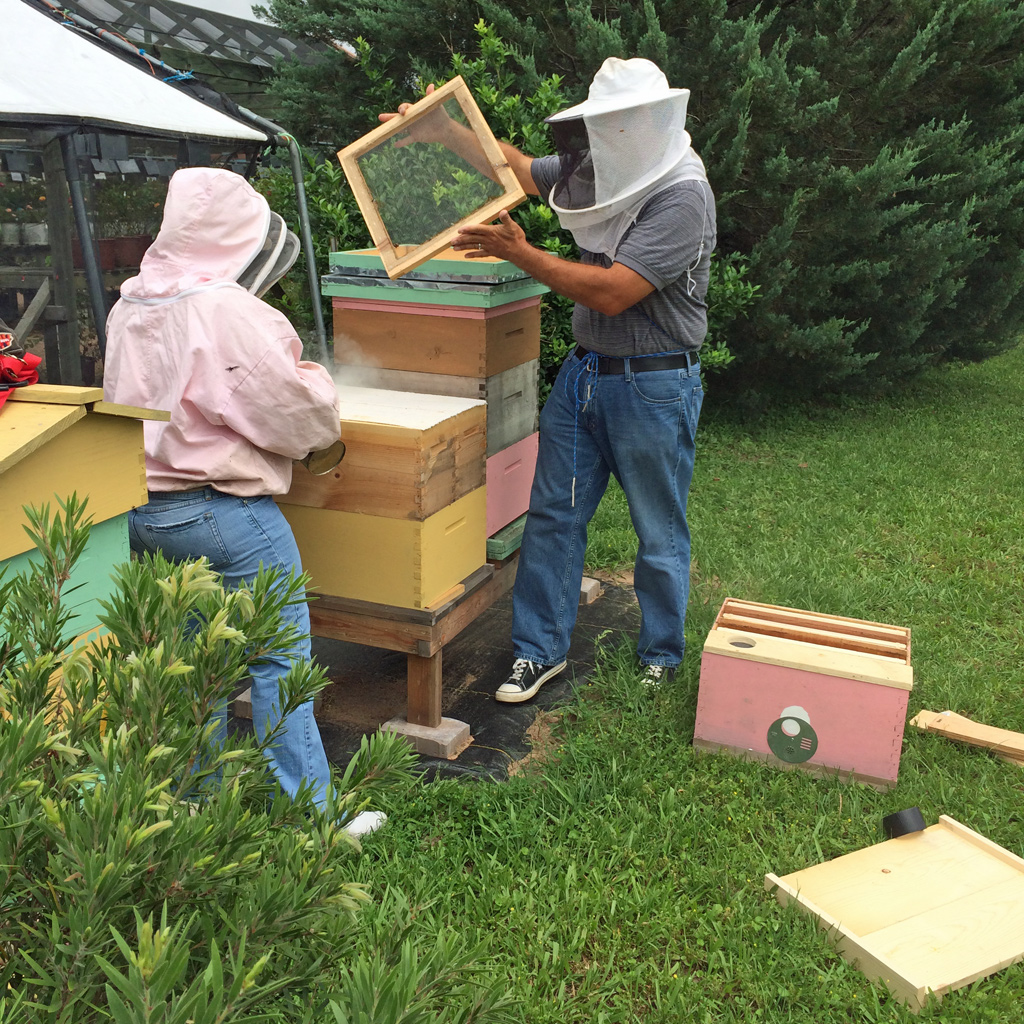 As we look back on 2015, we’re very happy and honored at what happened this year.  We have grown in our knowledge of bees, our product offerings, our number of hives, and in the number of great customers and friends that we’ve made this year.  The greatest honor has been our community recognizing our efforts in chemical-free beekeeping, which led to our nomination as a finalist in the Farmer’s Market Vendor category of edible Houston’s Local Hero 2015 survey.  Please take a minute to vote for us and help us spread the word about our leadership in the local food movement.  Here, we’ll try to summarize our year in review.

The year 2015 began with a very tough Winter for bees.  January and February were unusually warm, causing our bees to begin preparations for Spring early.  As the populations in our hives grew and some colonies began producing drones for Spring mating, reality set in and we had a hard freeze in March.  Some of our hives had created populations that outgrew their stores, so we began with fewer hives than 2014.  Also, while the nectar-rich Chinese Tallow Trees were blooming, the Houston area was drenched in rain for 3 weeks, so we did not get the typical Spring harvest to which we’re accustomed. Honey is a seasonal product and bees depend on a variety of factors to produce a surplus of honey to harvest.

We quickly rebounded from that setback.  In mid-March, we received our first phone call of the year about a swarm of bees and promptly hived and relocated them.  We captured swarms that were looking for homes, swarms that recently settled into a new home, and established colonies in structures.  Over the course of the year, we relocated 25 feral colonies into our managed yards.  We have created a portfolio of those swarms that you can access via this link.

Our queen rearing program matured this year, providing us with a steady source of healthy, productive queens.  When one of our relocated swarms needed a new gentle queen, we had one.  When a queen died unexpectedly, we were able to replace her instead of letting the colony raise a substandard emergency replacement.  When we needed to split a colony to stop it from swarming, we had a new queen ready to go.  Our ability to have queens in reserve enabled us to grow exponentially this year.

We expanded the area where our bees forage by creating new partner yards this year.  After our success at Plants for All Seasons in 2014, we created new yards in 2015 at The Arbor Gate, Jane and John Dough Bakery, Verdant Tree Farm, and the Tomball Community Garden.  We led two Bee Forums with Angela Chandler at the The Arbor Gate and were guests on Green Thumb Gardening on 700 AM KSEV.  We also taught a mini bee class for kids at Jane and John Dough Bakery on Earth Day!

Based on our honey production, we supported 15 market days in 2015, up from 4 in 2014.  We now sell our local honey at the Tomball Farmer’s Market and The Farmer’s Market at Bridgeland and can honestly say we have bees close enough to fly to those markets.  We also began selling honey through our partners at The Arbor Gate and Plants For All Seasons.  We were thrilled at the responses from our customers and partners.  We thoroughly enjoyed explaining why honey harvests change color throughout the year and taste different based on locale and loved giving someone their first taste of truly local honey!

We increased our product offerings this year.  To minimize any waste from our honey operations, we began rendering our capping wax in a solar melter and produced pure beeswax candles.  We also began offering our honey in stick form.  To support local backyard gardeners, we provide pollination services in the NW Houston area and offer classes and services to local beekeepers.

We look forward to another great year in 2016 and hope to see you soon!